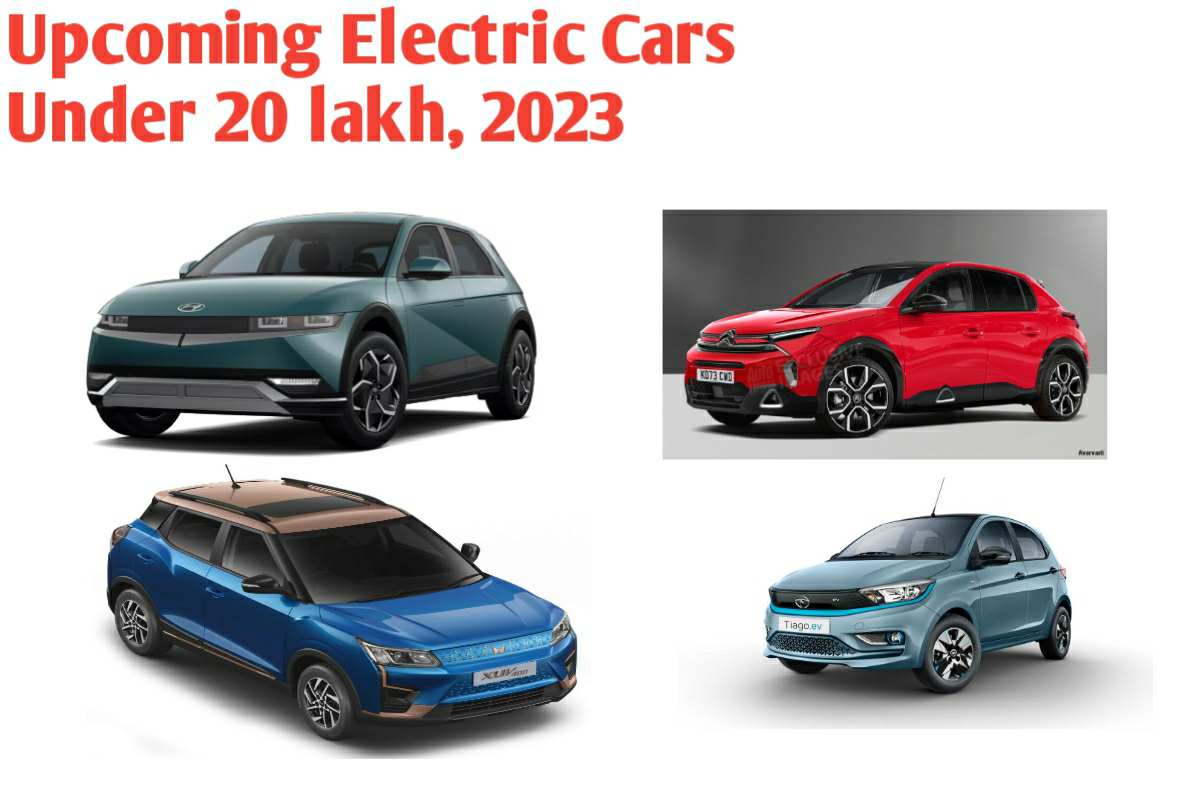 Upcoming Electric cars under 20 lakh,2023 that will launch in India like Tata Altroz, Mahindra SUV400, Hyundai, Citroen and more.

Electric Vehicles in India is carrying a high growth in India after the overwhelming oil price and the government subsidies for electric vehicles. After the electric two wheelers, it is expected electric four wheelers segments will carry a big boost in the upcoming year 2023.

After the launch of affordable electric car Tata Tiago to premium electric cars such as BYD Atto 3 , there are many EVs launched in India 2022. This year 2023 also will launch some big brands of electric cars like Tata Motors, MG, Mahindra and others.

In this article, we discussed some upcoming electric cars in India in 2023.

In 2023, Mahindra’s is going to debut its first electric car, the Mahindra SUV400, in India. It will be the first SUV variant from Mahindra. SUV400  will launch three variants and it may launch in January 2023.

The company claims that this electric car  provides a 456 kms range in a single charge. It will come with a fast charger that takes 0 to 80% in 50 minutes. It is expected to be priced between Rs 17 lakh to Rs 20 lakh.

After the Tata Tiago electric car, Tata Motors is going to launch its other variant electric car Tata Altroz EV. It will come with Tata new ziptron high voltage technology that offers you fast charging options. It takes 0 to 80% in just 60 minutes.

It is expected that its range will be 250-300 kms in a single charge. New electric car’s features will be the same as you see in ICE engine vehicles.

The MG Air electric car will be affordable at the same price as the Tata Tiago electric car.

Recently it was showcased in the G20 summit in Indonesia. It will come with a conversational charger. Its range may vary under 200 to 300 kms in a single charge. MG Air electric car is fitted with a 68hp powerful electric motor.

It will be an affordable car and price may be around Rs 10 lakh in the country.

Hyundai is expected to unveil the IONIQ-5, it will be the second electric car to come in India. But it is available all over the world.

The car, based on the E-GMP platform, gives a significant 480 km of range in a single charge.

It comes with fast charging options and it takes 0 to 80% in just 18 minutes. It may launch in India in January 2023. The company has not yet unveiled its design till now.

Citroen eC3 is a brand new electric car from Citroen debuting in India in the first quarter of 2023.

It will be an affordable electric car along with the Tata Tiago EV. Its price will be around 12 lakh in India.

The company has not revealed any details yet. This car comes with a 30.2 kWh battery pack that provides you 350 kms range in a single charge. The electric car is expected to offer a power of 86hp.

At the last not in the list, it is a premium electric car BMW iX1 electric car. Its price may be around Rs 60 lakh and it will launch around the second half of 2023.

It has two powerful electric motors that produce 313hp of power and 494 Nm peak torque. It is expected to range up to 438 kms on single charge.

It comes with a super fast charger that takes only 29 minutes from 0 to 80% .