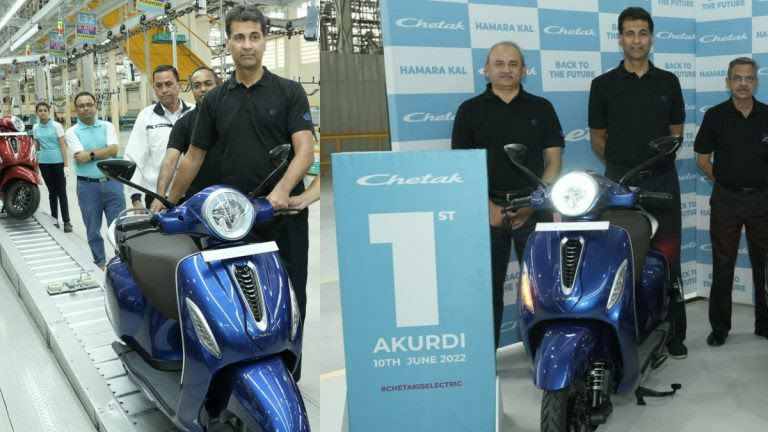 Bajaj inaugurated new plant at Akurdi in Pune, Maharashtra for more production around 5,00,000 units electric scooters per year. They started their new plant at Rs 750 Cr with new vender to grab the electric two wheelers market in India.

Bajaj is one of the leading exporters of two wheeler vehicles in our country. This company has sold about 18 million vehicles all over India and World.

Right now the market capital of Bajaj, two wheelers and three wheelers manufacturing company  is over 1 trillion in indian money. They have started focusing on electric vehicles. They have launched their electric two wheelers scooter as the name of Bajaj chetak.

Bajaj company is celebrating their 84th birth anniversary on the occasion of the late Shri Rahul Bajaj. Bajaj Technology Limited  inaugurated their new manufacturing plant at Akurdi in Pune, Maharashtra. This newly set up manufacturing unit based on cutting edge Technology dedicated to manufacturing electric two wheelers only.

After a fall in brand value, Bajaj  wants to enter with a new look in 2022 as a new avatar EV. Bajaj entered the EV section with the Bajaj Chetak electric scooter in 2019. Bajaj has already sold over 40,000 units of chetak electric scooter and has yet to fulfill 16000 bookings. Bajaj’s new plant at Akurdi is capable of manufacturing over 5,00,000 units within one year. They invested Rs 750 Cr in their new plant with a new vendor to focus on design, manufacturing and development. This plant Will generate about 11,000 people’s jobs when it fully starts.

Mr Rajiv Bajaj, chairman of Bajaj Technology Ltd said to news media ,” Chetak electric scooter is the original “Made in India ” , one of the safest and dependable superstars that won many hearts worldwide”. And it also has competition with Ather , Ola and TVs.

Bajaj has also announced that they would launch their new Verient electric scooter in the upcoming year under the Husqvarna brand.

1.India launches E-Amit portal at COP26 to make awareness and give best benefits to customers for adoption of EVs