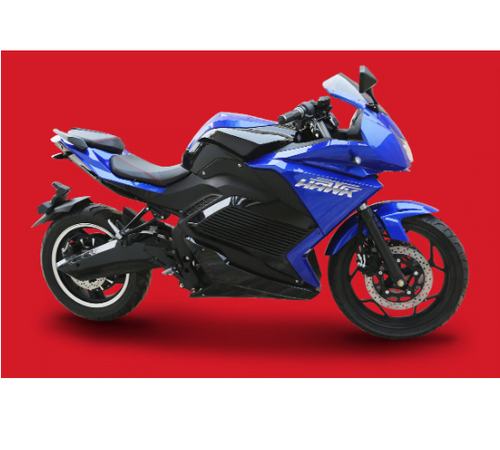 Bengaluru based electric bike startup company Evolet Motors has developed India’s indigenous superbike Evolet Hawk. The company has showcased this Evolet Hawk to the world at  the Auto Expo 2019. But the company has not announced its launch date. It is expected to be launched in early 2022. During the first and second wave of covid-19 pandemic has pushed many companies on the backfoot, and Evolet Motors is no different.

Now we will elaborate the features of Evolet Hawk.

The Evolet Hawk, India’s  indigenous, superbike comes with a top speed of 120kmph. The company claims that the bike can accelerate its speed 0 to 100 kmph in just 3 seconds.

The Emflux Motors offers a liquid cooled,  2000 Watt maximum power BLDC  motor that takes maximum power from a 72V/80Ah lithium-ion battery, which takes only 3 to 5 hours for 0 to 100 percent charge. The company claims that the bike can cover upto 100 km in a single fully charged.

The Evolet Hawk has a solid muscular steel trellis frame, with hydraulic telescopes suspension in front, and a double shocker gas with dual tube suspension technology at the rear.

The company provides you a disc brake in front and a drum disc brake at the rear, with standard dual channel ABS. The aluminum alloy wheel size of this bike is 17-inch with torque motion tyres.

The price of Evolet Hawk is expected to be between  Rs 1 lakh to 1.5 lakh in India.